Irish Liberty
Author unknown
Air: The Star of the County Down

Irish Liberty
Author unknown
Air: The Star of the County Down

The words of this song were brought back from Boston by the mother of Eddie MacDonald, in 1922. It was printed in The Pilot newspaper in 1868. It carries many of the themes that inspired the Fight for Independence. While no air was brought back, Paddy Lawless made a fit with the air of 'The Star of the County Down'; Seamus Dunne also suggested The Valley of Knockanure is a good fit.

Irish Liberty
Ye friends of Irish Liberty and sons of Granuaile
Be not afraid of England’s bull, his horns, his head or tail;
He’s but a shadow on the grass reflected from a tree,
So break the branches bare, brave boys, and plant the Liberty.

Eradicate the Saxon root that sucks our native soil
And takes from us the flower and fruit of our forefathers’ toil.
We’ll till the land where on it stands and plant another tree
Whose appellation e’er demands the name of Liberty.

The proud and haughty Rose must fall, our humble Shamrock Green
Must rise triumphant from the thrall and spread his glorious sheen.
The Red flag from our coast cut off, or trodden down must be
While Harp and Shamrock float aloft for Irish Liberty.

Prepare, ye Irish heroes bold and lovers of the Green,
To strike the Anglo foes and pierce them through the spleen;
Boot out the seed of Cromwell’s breed from the centre to the sea.
And never fear my Irish boys but we’ll have Liberty,

We don’t forget our martyred dead, Fitzgerald, Emmet, Tone;
We can’t forget, much later yet, the last brave heroes gone:
Yes, those who in Manchester died upon the gallows tree.
Revenge, my boys, their mothers cried, and seek your Liberty.

We don’t forget our brothers dear, who in prison cells
Are doomed to suffer most severe where nought but hardship dwells.
Condemned by bloody Britain’s laws, imprisoned there to be
For seeking for their rights and cause of Irish Liberty.

But now the day is just at hand, it o’er the billow dawns,
Whose brilliant sun shines o’er our land, its meadows, woods and lawns
To send the wolves and lions to their covert, all to flee,
While Erin’s sons with swords and guns shall gain their Liberty.

With Green flags fluttering from our staffs when Liberty we’ve seen
We’ll write our martyrs’ epitaphs in gold on marble stone
And Tara’s Harp, that silent sleeps, well strung again must be
And we will sing while Britain weeps of Ireland’s Liberty. 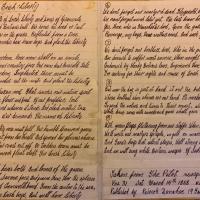 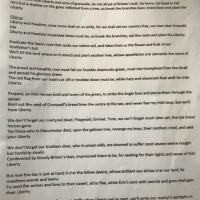